From: grape
26-Aug-22
From Wisconsin. When are you planting your winter rye? Any suggestions welcome.
From: MQQSE
26-Aug-22
I’m using it to over-seed the beans I am leaving standing. I’ll broadcast in Sept when the leaves on the beans are turning yellow.

Don’t plant too early as the rye will be unpalatable if it gets too mature before they are ready to utilize it and you want to hunt it.

Winter rye doesn’t become unpalatable when it matures I have seen deer eat 2’ stalks. I don’t think it’s a great attractant anyway but it’s not as preferred as it matures. They do like it better when it’s young and tender. Hungry deer will hammer 2’ WR.

From: craigmcalvey
26-Aug-22
I always hear that it’s “unpalatable” if planted before September. Due to farming time constraints, my family plants ours first week of august. Mix of rye and forage rape. The deer hammer it from the time is sprouts until spring when everything else has greened up. This is in Michigan with surrounding ag fields.
From: Gileguy
26-Aug-22
I planted rye about 10 days ago, it's about 4" tall now. Deer love it from now until snow covers it!! The biggest issue is when deer mow it down to the dirt, never saw them not like it.
From: Habitat for Wildlife
26-Aug-22
Our deer love rye grain, not quite as much as wheat, but it is better for the soil.

I have planted well into October in northern MO and had it germinate and be used by the herd.

I jumped the gun just a little bit on the rye myself, grape. They were calling for some good rains on Saturday night. I got this new 1/2 acre kill plot all prepped and tilled up this weekend. Seeded the rye on Friday, then dragged it in with a harrow section. On Saturday morning, I broadcast clover, then cultipacked it in. We got right at 3” overnight, but it has been so dry here, it didn’t wash the plot out at all. Just cut a few small small ruts in a couple of spots. Also seeded rye into a few other plots on Friday, as well. Other than being a tad bit early, I should get pretty good germination with that much rain.
From: grape
28-Aug-22
Thanks Frank..interesting. T Roy that looks awesome! Mine is getting rained on right now.
From: Zbone
28-Aug-22
If seeded just before a rain, it'll sprout within a hundred hours...
From: wildwilderness
28-Aug-22
Can it be sown into standing beans?
From: t-roy
29-Aug-22
Absolutely, wildwilderness. It seems to work really well if you can seed it about the time the beans are starting to turn yellow. If you have some moisture to work with, the beans dropping their leaf canopy works kind of like a mulch to help retain some moisture to help in getting the rye to sprout, plus it allows more sunlight in, which helps as well.
From: Habitat for Wildlife
29-Aug-22
Agree with Troy, will be doing just that into a 4acre stand of beans within a few weeks.
From: pav
29-Aug-22
We typically plant winter rye in Indiana between mid-August and early September based on the rain forecast. Planted our fall plots two weeks ago and the winter rye is already 4-6" tall. More rain in the forecast the next two days. Plots are thriving!
From: Zbone
29-Aug-22
I just broadcast seeded mine tonight in the rain, finished up after dark at 9 oclock... Hopefully it'll rain more tonight...

You guys were talking price, I paid around $17 per 56 pound bushel bag last year locally and around $20 this year at the same place and remember is was close to $42 for 2 bags with tax...

Day 5, mines up about 2-1/2" - 3"...
From: Reggiezpop
03-Sep-22
If you broadcast into existing clover, do you have to mow the rye come spring to suppress its growth?
From: t-roy
03-Sep-22
If it’s existing rye, I’d recommend spraying it in the spring with clethodim or Imox to terminate it. If you’re establishing a new clover plot, then I’d probably let it go.
From: Zbone
03-Sep-22

Mine has a little of everything in there as ya can see, weeds, grass and whatever, I don't have machinery to get it to bare earth, so I mow it as short as I can and have a rake type thingy behind the mower that scratches some of it to care ground and just broadcast it... Once it germinates and sprouts and reaches this size it out grows everything else until winter, then mow it in May or June again and keep mowing throughout the summer until this time of year again and do over...

Deer have already found it being out there just about all day... And a groundhog too... They like them fresh sprouts.... Notice the one doe has already turned grey...

From: Stressless
22-Sep-22
Moisture/Rain is the biggest planning factor within the planting window. 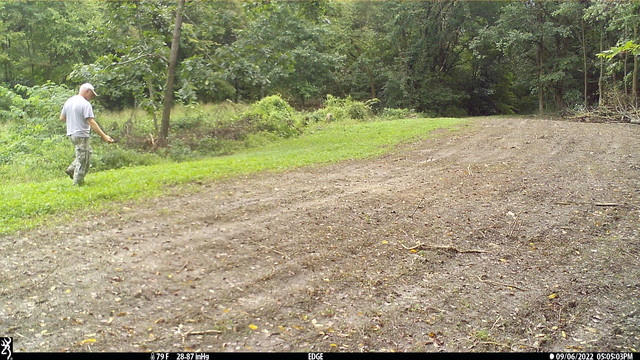 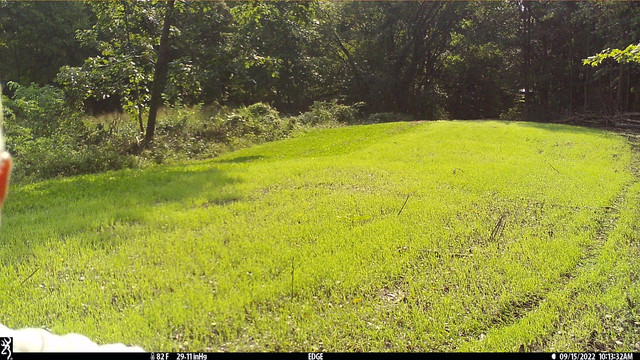 Totally agree about timely moisture, stressless. I finished prepping and planted this kill plot on August 27th. We had been extremely dry for most of August, but they were calling for a very high likelihood of some goodly amounts of rain. We got 3” of rainfall overnight, and I was concerned about this plot getting washed out and rutted up from the runoff. It was so dry that almost all of the rain soaked in. I had a couple of minor washes, but overall it turned out great.
From: t-roy
22-Sep-22

This plot is only about 100 yards right up the hill from my house, on the edge of a big bedding flat. I built a big permanent (2 person) stand in a white oak tree. You can see it in the pic. My wife doesn’t deer hunt, but she likes to go with me and observe. This stand is super easy to slip up into before daylight, with a south wind. There is always a lot of activity on this flat, so she should see lots of action.