Killing the moose is the easy part.

The Hardest part is getting a fire started. 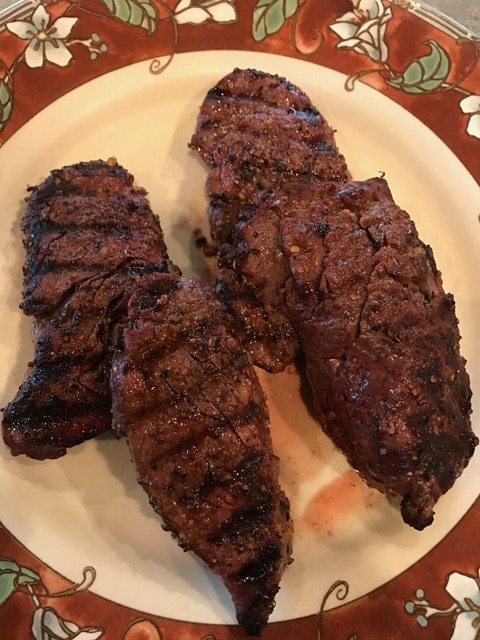 We cut our tenderloin steaks about 1-1/4" thick. Lightly oil moose tenderloin filets with canola or olive oil. Rub with 'Raising The Steaks' steak rub. Grill inside a Kamado Joe or Green Egg. Use real lump charcoal and not the foo-foo briquets. I like to add a 3 or 4 ounce solid chunk of mesquite or oak to the fire for some spicy smoke. Grill them at 500 degrees (at least) until 120-123 inside (use an instant-read probe Thermopen), then remove and let sit about 2 -3 minutes. My wife recommends a healthy glass of tannat or shiraz...but a cabernet or red zin will suffice.

Moose tenderloin w/McCormick Black pepper and Garlic seasonings, baker potato sour cream on the river.
From: So467
01-Oct-19
Bump since we are getting quite a few on the meat pole!!
From: Nick Muche
01-Oct-19

Moose tenderloins wrapped in caul fat, it was amazing...
From: Fuzz
01-Oct-19
Nick... I've seen Steve Rinella praise the use of caul fat... I'm looking forward to using some from this year's yet to be killed deer.
From: altitude sick
01-Oct-19
Nick, Does the caul melt away like lard? Does it add good flavor or just hold it together.
From: Nick Muche
01-Oct-19
It has a buttery and salty flavor. Very good tasting. My advice would be to just use one layer otherwise the taste can be a bit overwhelming. We loved it!
From: Yellowjacket
01-Oct-19
Ditto on the moose tenderloin wrapped in caul fat. Moose tenderloin from my cow this year may have been the best piece of meat I've ever eaten!
From: carcus
01-Oct-19
Just finished a tenderloin from this year's bull, pan fried in bacon fat, unreal, I'll never bbq another tenderloin
From: Nick Muche
05-Oct-19

Snowing in Fairbanks so it’s a good time for Moose Chilli.
From: oldgoat
05-Oct-19
Yeah so far, tenderloin in camp with the guys cooked over the campfire! But bacon wrapped filets smoked then reverse seared is close second! If you need a marinade you're doing it wrong!
From: carcus
05-Oct-19
Just had some moose chilli, was so good
From: t-roy
05-Oct-19
What’s with the plastic liner in the crock pot, Nick? Your night to do the dishes?! ;-)
From: Nick Muche
06-Oct-19

Troy - I use the same thing, those liners are legit. Screw the scrubbing.

From: 'Ike' (Phone)
06-Oct-19
Dayum...All of it looks good, need to take some steaks out!
From: DonVathome
07-Oct-19
Do you buy caul fat? New one on me curious...............
From: Nick Muche
07-Oct-19
No, you get the caul fat from the animal while processing it. It’s the lacy fat that lines the outside of the animals stomach.
From: APauls
07-Oct-19
Nick I thought you owned an Instant Pot. Why are you using a slow cooker? lol
From: Nick Muche
07-Oct-19
I cooked the chili on my stove top then put it in the crock pot for the rest of the weekend so it was warm when I wanted a bowl.

I made a bison roast in my instapot last week one evening and it was incredible. Only took about 30 mins for a fall apart roast....and that roast had been in my freezer since October of 2016!

From: elkster
07-Oct-19
Caul fat is rich, very rich. It can coat your mouth when it cools kinda like wax.

A little is good.

From: elkster
07-Oct-19
You've seen caul fat every time you have field dressed a big game animal and never paid it close attention. Remove some of the "doily", lacy, white webbing next time surrounding the stomach and try it.
From: DonVathome
07-Oct-19
I was guessing that was it. I never heard of using it until now. My first wild guess (pun intended) is it would be gamey but no one mentioned that yet. I did pay attention to the "strong favor" comment though!
From: elkster
07-Oct-19
It doesn't have an "off" taste. Its clean tasting.
From: Stoneman
17-Oct-19

Spent yesterday making summer sausage.
From: newfi1946moose
09-Nov-19
Coat lightly w/salt and pepper. Broil to medium done. Let set in fridge a day or so then slice thin; 1 slice of homemade bread, butter bread lightly and ketchup to taste....darn good cold meat sammi! Take these to the deer watch down behind the house.
Register here to reply to this topic