Full draw, but gator just out of sight

Full draw, but gator just out of sight
My best friend and I took a long weekend to the great state of Florida for a little winter romp away from the cold and hopefully connect with some critters.

We had planned to start in Tampa with a night of bowfishing, unfortunately the weather had different plans. Wind and rain put a damper on that, so we headed straight down to the Okeechobee area for a gator hunt that was scheduled for the next day.

We were cruising canals on private land in the truck. We saw lots of gators as the morning warmed. Finding the. Big ones was a little tougher. My buddy stalked one and didn’t get a shot (pic above) and then got up on another good one only to have the line snag in the reel for a miss.

He finally got a shot at a real toad about 11. With a 18 yard shot he anchored him, gator didn’t want to move. Couple more head shots and a miss. Finally put a bullet in him to finish it off. The gator ended up measuring 11’ 2”.

One down one to go!

I was up next. We re-rigged bows and continued the tour. The alligator sightings slowed as the day went on and some clouds came in. I didn’t get but one opportunity Friday afternoon, the only chance was on a stock tank out in a cattle pasture that a ranch hand told us had a big gator hanging in it. We found him, but as I started to come up and draw at the same time he busted out. At 15 yards you can’t get away with a whole lot on those big guys.

Nice dinner back in Okeechobee , and early to bed.

Saturday morning we try some different areas and just aren’t really seeing many, kinda cool and not a lot of sun, just not real good conditions for alligators. We covered a lot of miles of canals, cane fields, and orange groves. But just little guys. I think everyone but me was getting a little antsy, I don’t get super worried, either it happens or it doesn’t.

Finally around noon we stumble on to a good gator laying up out of the water on a pretty steep bank. I was able to put a good arrow right behind his arm. After some pulling and fighting I bounced a second one off his back and finally got a second holding arrow in his chest. Little more fighting and I was able to put 2 big boy buffalo arrows in his brain at point blank. I didn’t need a bullet to finish, so he should totally qualify for p&y.

Iguana in tree
The next leg of the expedition was east coast. We headed out early in the evening with the rental car pointed towards Fort Lauderdale. The weather for Sunday looked awesome and hopes were high for the next days hunt after the great success on the alligators.

The next leg was Iguanas in the canals around The Fort Lauderdale area. We meet the guide just 8 miles from our hotel at the public boat ramp. We were set up with a bow with fishing arrows/reel and blow guns. Not really knowing what to expect we were excited to see a good size lizzard from the boat ramp!

The iguana action was awesome! Pretty much non-stop all morning. The bigger ones were our sunning and we had an awesome time. We certainly didn’t get every one we saw or even everyone we shot at, but it was a complete blast. We stopped for lunch at a canal side bar and carried on to the early afternoon. When we finally quit we had 39 iguanas.

I think our average was about 5’. They were just everywhere and when you started to close in on one you would see 3,4,5 in the surrounding trees you didn’t originally see.

Small bass, long arm ;)
We had Monday booked with out guide as well. We decided we had pounded the iguanas enough so asked him what else he may want to do. He suggested offshore light line fishing or bass fishing from his airboat in the Everglades. The offshore forecast looked to be pretty choppy, so we decided to try to catch some bass the next morning. The airboat ride was super cool, and the area is like nothing else I’ve ever fished. We thought it was gonna be a slaughter like the day before with the iguanas after hooking up like 4 times in the first 10-12 casts, but it faded quickly. We caught a few bass, but nothing very big. But certainly not a bad day of bass fishing where i come from.

That closed out the long weekend, it was 78° when we left Florida and 28° with a stiff north wind when we landed back in Oklahoma. Florida is a bunch of fun, I’m sure a return trip is in my future.

Airboat ride into the setting sun. Not exactly true, that was the rising sun, but it sounds better to end the story with a sunset shot ;)

Did you eat the iguanas?? Keep the skins??

From: [email protected]
17-Dec-19
Jim, how cool is that. Nicely done. Gator skin boots????????????
From: t-roy
17-Dec-19
Very nice, buddy! Congrats. Looks like you had a blast! Did you employ any of the stalking techniques on your gator, that you perfected up in Kodiak last month?! (Treeman hop or the Sherman shove)
From: JTreeman
17-Dec-19

T-roy, I didn’t have my deer hat, so I decided the “treeman hop” wouldn’t be too effective. Gotta have all the pieces for it to come together.

Paul—No boots for me, not a boot guy. Getting hide tanned and euro mount on the skull.

RK-we brought about 40 legs home, defiantly get funny looks from the TSA girls when you have iguana legs in your carry-on!

Hunt—thanks, but you are the real hero. We would have had 69 iguanas if you were there!

From: huntinelk
17-Dec-19
Awesome trip, Jim
From: bigeasygator
17-Dec-19
My best friend and I took a long weekend to the great state of Florida

I don’t recall going on a trip to Florida this last weekend...

Congrats again bud!!! Way to stick with it. I told you it was gonna happen!!

PS - Just let me know when my matching iguana belt and suspenders are ready, along with my gator boots!!!

From: cnelk
17-Dec-19
Thats pretty cool Jim. Fun hunts rock!
From: t-roy
17-Dec-19
I knew he was just stringing you along up on Kodiak, BEG. I think it was all those flaming donkeys talking ;-)
From: JTreeman
17-Dec-19
Don’t worry Jason, we will be back to besties next month in Reno. January is your month, gotta take turns.

From: Nick Muche
17-Dec-19
Damn Jim! Nice work man, congrats, looks like a very fun time but I bet you didn't smile once! Just ain't your style :)
From: Huntcell
17-Dec-19
wow!! What a trip. Congratulations.

and a rare orange iguana. from Margo Largo side?

From: JL
18-Dec-19
^heading south to the old stomping grounds for a few months for fishing and hunting. Been doing it for the last 7 years.
From: BULELK1
18-Dec-19
Dang good Read Jim

From: Zebrakiller
18-Dec-19
thats a great trip Jim cant waitcto here details next month
From: midwest
18-Dec-19
Badass, Jim!
From: Habitat for Wildlife
18-Dec-19
That's a neat hunt!
From: Beav
18-Dec-19
Cool trip Jim! Beast of a gator and load of iguanas. Well done!
From: iceman
18-Dec-19
My hero!
From: Buffalo1
18-Dec-19
Jim I think you have put the iguanas on notice in Fla like wildebeest in Africa.

Congrats on a super adventure.

From: M.Pauls
18-Dec-19
Awesome trip and write up Jim. Looks like PILES of fun! Thanks so much for sharing. I was down in Ft Lauderdale last year and the Iguanas seemed to be begging me to be hunted, but I was unarmed. They're everywhere! I may be going down with my wife next winter. I'd be interested to hear who the guide was and what a guy could roughly expect to pay for a day of hunting Iguanas?
From: elkmtngear
18-Dec-19
Man, that looks like a ton of fun!

From: SteveB
18-Dec-19
What a cool trip!
From: Gator
18-Dec-19
Granted, we don't have the best of deer hunting but make up for it with other critters. Congratulations on such an awesome trip.
From: JTreeman
18-Dec-19
Thanks for all the positive responses guys. I really don’t know if the iguana hunting is always that good, or if we just hit it just right. It’s awesome to get down there and have a successful trip this time of year for sure.

I think I got back to everyone who pm’ed so if I missed you feel free to ridicule my publicly here.

From: Bake
18-Dec-19
Have you eaten any iguana legs yet?
From: Swampbuck
18-Dec-19
Great lizard hunts! Thank you for thinning the herd. Those damn things ARE everywhere
From: Zackman
18-Dec-19
He’s MY hero!!
From: krieger
29-Dec-19
What a hunt! Great gators you guys got into, and that is a load of lizards, well done sir!
From: otcWill
29-Dec-19
Now that looks like fun! Good stuff Jim
From: JTreeman
29-Dec-19
Come on Krieger, post up some of those lizards you killed this week! 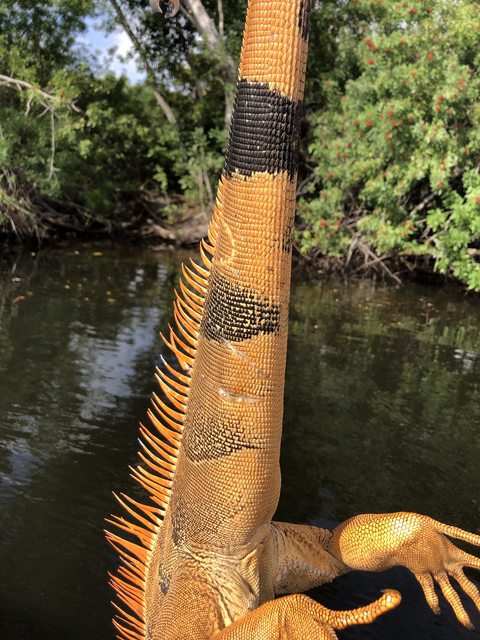 From: krieger
30-Dec-19
Did you get so bored shooting them that you tried to catch some with your teeth JT ?!?! This one had bite marks on him...lol
From: krieger
30-Dec-19
I put pics over on my initial thread, in the Bowfishing section, didn't want to clutter up yours. I will add this one, I lost all my original line ( shooting a spin cast reel) with a miss ( it does happen on occasion...) arrow got tangled in the mangroves, you have a better chance of getting a dollar out of a Scotsman's front pocket than you do getting an arrow out of this jungle....Went to the boat store right off the canal and got some PowerPro 150lb test, reloaded the reel...It shoots well, but they do break off , depending on where they are at..This one I whopped, knocked him clean off the seawall, then he rolled around and rubbed the line on the rocks until he broke it, ( they can twist around faster than a New York City lawyer can twist the facts) I retied another arrow, ( not easy with JP yelling at me..." THERE HE IS, THERE HE IS!! " lol. I looked like an epileptic oyster shucker trying to watch the lizard with one eye and retie the arrow with the other ) we got on him again and I let fly. Ended up putting 2 arrows within 1/4" of each other. Lucky I didn't break something...so that's the story about the double shaft bull iggy, in this pic. 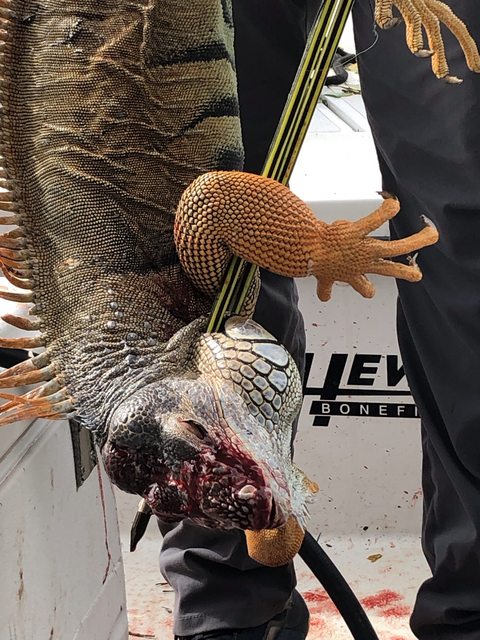 We didn't get the numbers you guys did, but I had my girls with me, and didn't want to get them too worn out. As awesome and interesting as I am, they still get tired of watching me shoot stuff, I don't get it myself. ;) Seriously though, it was a good day. Momma even got some good video on her phone of 4-5 shots..I need to have my kid help me get those on YouTube I guess.. 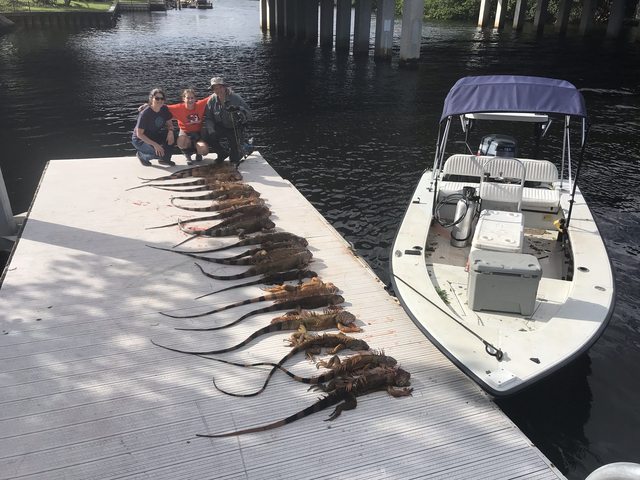 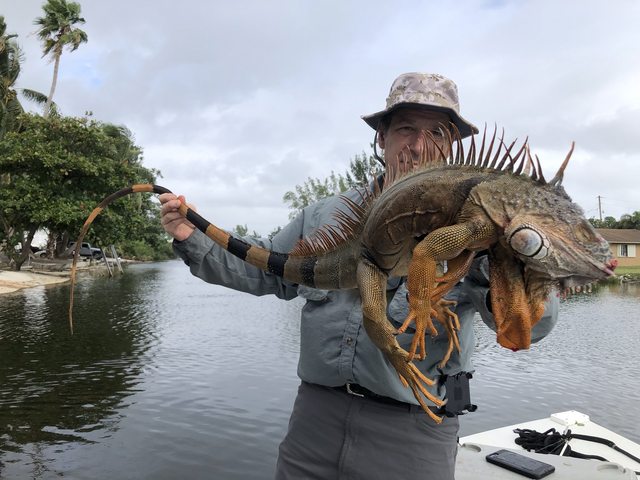 From: JTreeman
30-Dec-19
Looks like you did damn good! It’s defiantly a lot of fun. I’m trying to figure out how I can get back down there again!

those iguanas......sheesh....I dunno if i got what it takes to put my hands on them. Im gonna have to toughen up a bit. Surely no problem running arrows through em tho! You guys musta got tired from shooting!