Habitat for Wildlife 03-May-20

Here's my tom... Ed F
From: Brotsky
02-Apr-20
The best kind Ed! Congrats!
From: bohuntr
02-Apr-20
Archery turkey opens here in SoDak on Saturday. I hope to get one like Ed. I have an archery turkey tag and a mountain lion tag. During the course of the fall there were multiple trail cam pics of mountain lions on properties adjoining mine, including one that appears to be a big male.
From: Scoot
02-Apr-20
Not what I expected, but that's a beauty, Ed!
From: Huntcell
02-Apr-20
Great TOM! The picture is Great also.

No snow or dogs in pic did you call him in ?

Gonna be tough to beat that one. ;)

They had been giving me fits but started acting right this morning. The video is really long, but I like watching them work, skip to 9:40 for the killin part.
From: Hawkeye
15-Apr-20
Simply impressive sitO...Wow! Amazing how much you can get away with when they are focused on the deek. Thanks for sharing that--awesome!
From: t-roy
15-Apr-20
Excellent video, sitO! Congrats on a nice bird and thanks for sharing the video!
From: Native Okie
16-Apr-20
Great video as usual, sitO!
From: altitude sick
16-Apr-20
Without a blind is tough
From: Carcajou
16-Apr-20
Spectacular video, clarity, patience, great shot, good job under pressure without a blind. Love to see it! Thanks for sharing!
From: DEC
16-Apr-20

I was in Texas last week. Tough hunt this year. Tons of agressive jakes running off the toms.
From: Whocares
16-Apr-20
Awesome sito! Felt like I was right there. Thanks.
From: sitO
16-Apr-20
Appreciated fellas, congrats to the others that have been out chasing. DEC that is some awesome footage of turkeys, and Ed I think your "Tom" beats'm all!
From: jcneng
16-Apr-20
Awesome video Sito! You have WAY more patience than me!
From: Paul@thefort
16-Apr-20
Sito, I held my breath for 13 minutes until the final shot. Loved the background bird music. Interesting, two toms, one waited at the jake decoy, while the dominate tom checked out his girlfriend, to his demise.

DEC, that looked like more than fun. my best, Paul

I don’t have any cool videos, but here is my first OK bird of the year. Shot was 10 yards right in the decoys. Ran 15 and fell over dead.

Chris, Too much fun and on video. Paul

I took a young buddy out this morning and he killed this nice Tom. His first bow kill!! I’m so proud of him.

Went to work calling for my 13 year old son and his first turkey. He used the shotgun but this old gobbler was appropriately nick-named "Paintbrush." He asked for and obtained his own permission to hunt some killer spots and kept passing up toms I would call in. I kept telling him he'd regret it but it worked out:)
From: ROUGHCOUNTRY
20-Apr-20

I was able to get out this morning and called in this double-bearded hammer off the roost. It doesn't usually go text-book for me but this one did. It's my lucky decoy I bought from Huntman:)
From: AT Halley
20-Apr-20

Scoot put me in a prime spot this weekend and I shot my first turkey with a recurve. First animal period.
From: sitO
20-Apr-20
Those are some HUGE beards/hooks/birds Mike, congrats to you and your son! Some really nice birds on here, way to go folks enjoy the "fruits"!
From: Brotsky
20-Apr-20

Nine gobbling, fanning birds on the hill I told my son to be on, he chose a different spot

Nine gobbling, fanning birds on the hill I told my son to be on, he chose a different spot
Sometimes when the sun comes up its gonna be a nice day. There are 9 in this pic. Saw 16-17 total that morning.
From: SBH
21-Apr-20
This is great! Nice work so far. Keep em coming guys. AT- Huge congrats on first kill with the recurve.
From: Dale06
21-Apr-20
This will be the first year in 20 plus that I have not bowhunted turkeys in one or more states. Moving right now so “no can do”. Good luck to all you turkey hunters.
From: Bake
21-Apr-20

I don't usually get to post to this thread, as I have a bad habit of shotgunning turkeys :)

Went out to the farm yesterday evening to glass from a big hill. Watched 2 toms and 5 hens roost and marked the tree.

Got up extra early to get in while it was still plenty dark. Sometimes hard to tell your landmarks in the dark, or how close or far you are from stuff. So when light broke, I ranged the roost tree, and I was 155 yards from it.

Everything flew down, and the toms spent about an hour strutting and harassing hens at 110 yards. Then 2 hens broke off and disappeared, and 3 headed to me. The toms followed respectfully behind, and then made a beeline for the decoys.

The non-dominant tom appeared to have a longer and fuller beard, so he was my target. I shot him at 9 yards as he pushed my jake decoy around.

Opening morning in central Wisconsin. He didn't go far. Right after the shot two toms came in and finally left after they got bored. Lots of action. It was a great morning.
From: midwest
22-Apr-20
Whoa, Scoot! Let's see those hooks!

Nice work everyone. My season has been pretty tough so far.

Zach and our buddy pulled off the quad!
From: Beav
22-Apr-20

Zach killed this big tom when he tried cutting off two 2 year olds that were headed for the decoys.
From: Beav
22-Apr-20

My daughter Maddie with her first tom of the season.
From: Beav
22-Apr-20

Maddie with her second tom. 5 hours of searching and a little blood before we finally were able to get our hands on him.
From: Beav
22-Apr-20

Will and I with a double!
From: JTreeman
22-Apr-20
I knew Bear would be here so to fill up the thread! You gonna have to stop, Pat can’t afford all the server space for you to post all the stuff you guys kill!

From: Brotsky
22-Apr-20
Awesome season and great pics Beav! You guys are truly living the dream! Congrats to you and the family!
From: Hawkeye
22-Apr-20
Great pics Beav!
From: otcWill
22-Apr-20

First 2 Nebraska birds. Thanks again boys!
Triple double this season. Double with Beav above, Double solo only cuz I couldn't convince Zach to shoot. Thanks buddy! And opening day CO double shot my fourth bird of the season and third double with my buddy Justin. Good season. Great friends
From: Brotsky
22-Apr-20
Beautiful birds Will! Congrats!
From: Scoot
22-Apr-20
Will, I'd say that's "not too shabby"!!! GREAT work and looks like a blast!
From: SBH
22-Apr-20
Easy does it boys!!! Strong work all around.
From: INDBowhunter2
22-Apr-20

Top 5 greatest moments of my life for sure. Way above any of my first kills. Hopefully he remembers it for the rest of his life. I know I will remember it for the rest of mine. He’s 6 and made a perfect shot. To have both of them there was even sweeter. They are twins.... I have it all on video and it’s awesome.....
From: Marty
23-Apr-20

My son Hunter and I got a double just after lunch here in NE
From: Marty
23-Apr-20

Then later in the afternoon, i made good on a second opportunity!
From: Scoot
23-Apr-20
Nice work Marty! IND- that's pretty darn outstanding if ya ask me! Congrats to all three of you. His sis looks as proud as he does!
From: Habitat for Wildlife
25-Apr-20

This morning, MO. Congratulations everyone!
From: T Mac
25-Apr-20

My son on his last youth turkey weekend this morning!

My son on his last youth turkey weekend this morning!
From: Beav
25-Apr-20

Great pics and vids. Here’s number 3 for me. Was going for 4 but still undecided on Ks. Can do it with minimal contact by bringing food,staying on my own land etc but still concerned about the impact if i had trouble,got sick,whatever. Wait n see.
From: midwest
26-Apr-20
That's a big bastard, HUNT!
From: patience2spare
26-Apr-20
OTCWill and Ermine in the woods together with bows... There won't be anything left alive to hunt! Great thread - Congrats to all! Pete
From: Dino
26-Apr-20
Great bird Hunt! Congrats!
From: midwest
26-Apr-20

Congrats everyone! Covid's been hitting the birds hard.

Birds have been "educated" this year on public land...due to an Army of all-week hunters after Covid layoffs :^/

Couldn't pass this one, when the "gang of jakes" decided to finally come in for a close look...

I had a goal to take a gobbler with an Allen Model Compound. I found a 1969 model for sale from one of the most humble old hunters I ever met. He was excited for my quest and gave me some of the same wood arrows he used to hunt with along with some bleeder blades from the Bear Razorheads that had tipped them. After acquiring some vintage Razorheads I was set. Long story short, I didn’t take one Iowa gobbler with it, I took two! Shot 15-20 seconds apart. I think she earned her right to retire!
From: otcWill
02-May-20
Now that's cool!! Well done.
From: Cobie33
02-May-20
Thanks Will.
From: midwest
03-May-20
Cool Cobie!
From: Habitat for Wildlife
03-May-20
That is really cool! Congratulations.
From: Hawkeye
03-May-20
That's incredible Cobie! Great post and thanks for sharing. Congrats:)
From: t-roy
03-May-20
Way cool, Cobie! It’s not quite primitive gear, but darn close!
From: elkmtngear
03-May-20
Congrats getting it done with the Allen...that's a beefy old dinosaur of a contraption!

From: Tonybear61
03-May-20
My son and I have been playing the cat n mouse game with turkeys on a farm for weeks. Just cant get them in closer that 30 yds so he can make a recurve shot. Commercial blinds, natural blinds and even some reaping attempts. Just haven't been able to pull it off. He was thinking tree stand as they always seem to be very wary to anything on the ground.. Decoys or no decoys.
From: SBH
05-May-20
When will the turkeys in Beav's neck of the woods get the message? Or are they all dead? Helluva season Harlin.
From: Beav
05-May-20

This may be the last bird of the season. Took my daughter's boyfriend out. This was his first turkey with the bow. Barely beat the downpour! Cobie33 that is super neat.
From: Errorhead
05-May-20

Bird#2
From: Cobie33
05-May-20
Thanks for the replies to my post fellas. Another nice batch of beautiful birds taken by you, your friends and family Beav, kudos!
From: Elite 1
05-May-20

Great birds everyone.
From: kstout
06-May-20

Got a Tom this afternoon with my Northern Mist Sprague longbow. Ten inch beard, 1 1/8” spurs.
From: SaddleReaper
08-May-20

Wyoming bird
From: Paul@thefort
11-May-20

Turkey decoy attracted a Colorado bear during the night. I found it 200 yards back in the woods.

Turkey decoy attracted a Colorado bear during the night. I found it 200 yards back in the woods.

had to replace on rod hub that was also broken. All repairs completed, even to the head of the jake decoy. Good as new. My best, Paul

My daughter with her last day of the Minnesota season Tom!! Also 8 months pregnant!!
From: sitO
04-Jun-20
Congrats to you and your daughter Chad, and thank you for passing it on!

I took my buddy Mark out for a last day "stab"...it went as planned til the end, but that's hunting! 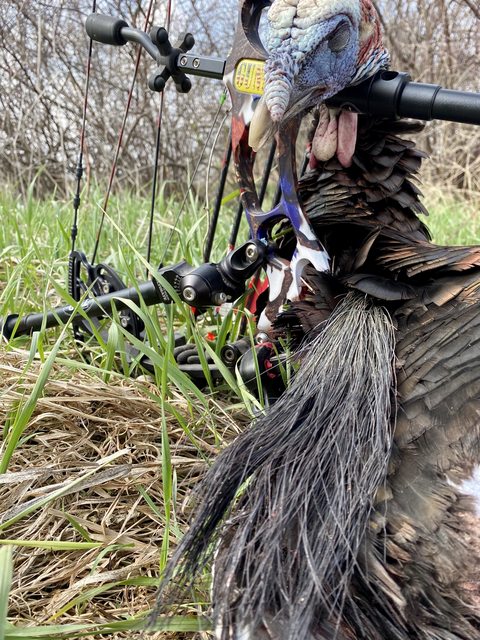 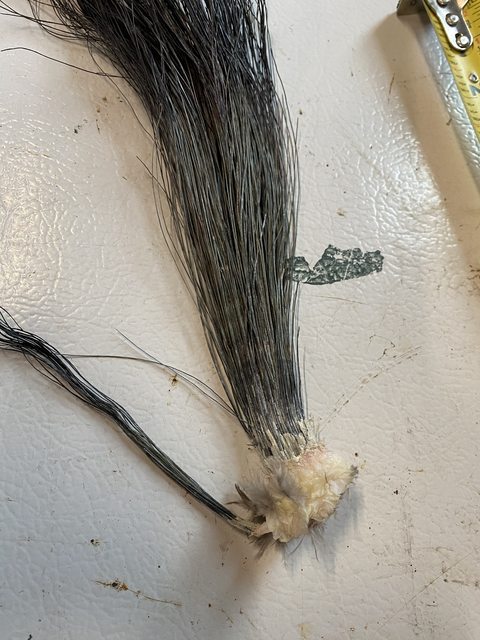 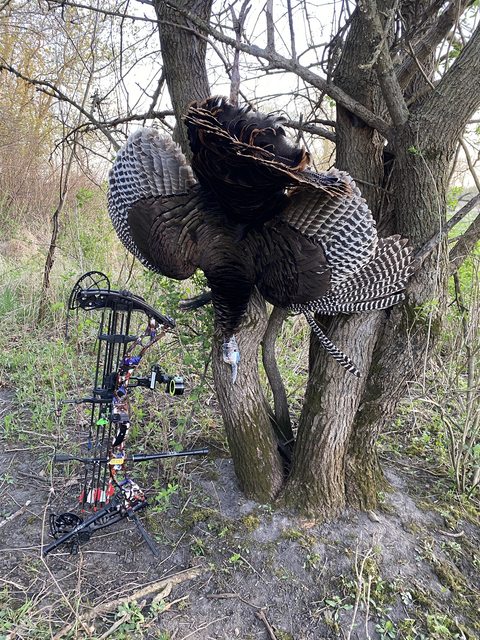 Had a great spring.