From: NEIAbowhunter
12-Jul-20
I know it's a bow forum but I'm still another point away from drawing my minnesota bear tag and probably 2-3 years away from wisconsin. If I want to take a trip that I can afford after building a house I was thinking of a prairie dog hunt in SD. Anyone ever done one and have a recommendation on an outfitter or anything? I'm just starting to do my research but thought this would be a good place to start.
From: JohnMC
12-Jul-20
Should I say it?

No don’t do that.

From: grizzly
12-Jul-20
Dakota might have a few for you. Good guy.
From: Matt
12-Jul-20
I would go with contact Jim River, Bowsite sponsor last I looked.
From: TJS
13-Jul-20
You could do some research and DYI. May be safer to go with an outfitter, but doable without. I drove cross country with my son after his Marine Corp time. Stopped and inquired at several outdoor stores and got decent info. If doing it again, I would look into South Dakota or Wyoming, though many states have good populations. BTW, zooming in all the way on google maps can show their holes.
From: wytex
13-Jul-20
No need for an outfitter, they are all over in Wyoming on public lands. Never understood needing an outfitter for PD shooting. Literally drive out to some public land and look around, Wyoming is about half public land so you can find some pretty easily.
From: Inshart
13-Jul-20
Prior to booking with Jim Rivers I would highly recommend researching him first, enough said.
From: Predeter
13-Jul-20
If you're willing to walk a little bit you can get into some good shooting without an outfitter in South Dakota. There are several towns on the Buffalo Gap that will offer all the shooting you can handle. Be sure to look into the black footed ferret closure areas on Buffalo Gap, there are some big towns that are closed to shooting.

If you want to drive to the town and shoot from the truck you may be better off with an outfitter. Any towns like that on public ground are pretty shot up in my experience.

Be prepared for the heat, ain't no shade out there!!

From: Michael
13-Jul-20
I agree with no outfitter needed. I have shot them in SD, Ne and Wyoming all on public land while coyote hunting.
From: Dale06
13-Jul-20
I’ve shot them at least once every year the past 25+ years, except I missed two years. I’ve shot public, private and Indian reservations, in SD, Wy, Ks and Colo. It is true that decent hunting sometimes can be found on public land. But unless you are lucky, that land will have been shot by others and the amount of shooting will be less, or far less. If you have the time to search for places to shoot, there’s nothing wrong with that. If you want to spend several hundred a day, likely get a place to stay and possibly some meals, and very likely much more shooting, hire a guide service. I’ll also say that since I stated shooting them in the early 90s, the difficulty in finding a good place to shoot has become much more difficult and the quality (number of shots taken) has decreased a lot.
From: spike buck
15-Jul-20
I would recommend Jim Rivers Guide Service. I know a couple of hunters who have hunted with him many times. They just got back from a recent Prairie Dog hunt and are planning on returning. He (Jim River) is also a Bowsite Sponsor
From: krieger
15-Nov-20
There's a big difference in what people perceive as " shooting " PD's....if you are ok with a few dozen shots a day at longer ranges, public will work. If you want to seriously get some quality shooting in, 200 rds at less than 200yds, you will need an outfitter. Just the way it is now.

I shot the Rosebud in '94, it was awesome, all over SD in the later 90's, then " long range" shooting became popular, and the CO greenies started talking about Endangered status, and the SD landowners poisoned 80% of all the PD's in the state. A double whammy...it's never been the same since.

From: wytex
15-Nov-20
I could take you out to a spot on public you could shoot all day. Not in SD but Wyoming. No need for an outfitter. In fact I know several spots with huge towns. They are still out there and private access is not hard to get if you're respectful.
From: LINK
15-Nov-20
Any dog with a bow is Pope abs young in my book. They are some arrow ducking suckers. I am about 0-10 abs give up after losing a quiver full of arrows.
From: ahunter76
15-Nov-20
Son in laws Dad goes to SD on a regular basis, Public ground & they have a blast. Antelope hunting, Wy. public we saw them in many places.. I would not spend $$$ for someone to show me.
From: Duke
15-Nov-20

Get to know some locals! I have shot them for years by just talking to people and having good contacts. The boys are both addicted.
From: krieger
15-Nov-20
They are some arrow ducking stinkers...I got a few with my bow in June. Blowgun didn't work at all, lol. They saw that dart coming and were back down in the hole, had lunch and a nap before it landed... 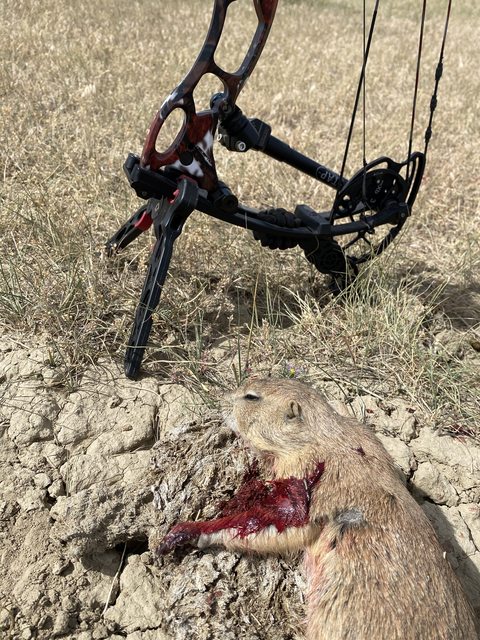