Nice looking buck for sure.

From: Mule Power
13-Jan-21
No surprise over there Pat. If you use Facebook you should join the Ohio Big Buck page. The number of monster bucks is amazing.
From: Will
13-Jan-21
Absolutely amazing deer!
From: Bowboy
13-Jan-21
A bruiser of a buck!
From: Kevin Dill
13-Jan-21
Pure natural artistry right there.
From: midwest
13-Jan-21
Must be around 6 foot of main beams!
From: keepemsharp
13-Jan-21
Already cleaned up, was it a legal kill?
From: IdyllwildArcher
13-Jan-21
What a cool looking rack. That had to be exciting seeing that come from the neighborhood, eh?
From: APauls
13-Jan-21
Genetics are there!!! Has to be exciting!!
From: Mule Power
13-Jan-21
Keepmsharp it says”found dead”
From: [email protected]
13-Jan-21
WOW, glad I passed on that buck last year as I see he grew some. Oh really! Neat head gear.
From: Dale06
13-Jan-21
I’m not an inches guy. Nice deer.
From: Rocky D
13-Jan-21
Wow, I think that is an amazing frame on that rack. If you look at that trim on the shed it is probably two inches wide. I can add a lot of those inside his rack and those massive main beams do not overwhelm the balance of the rack.
From: t-roy
13-Jan-21
I’d loved to see the score sheet on that buck! For all of the neat character aspects of the the rack, the deer looks pretty symmetrical from side to side. That is one cool looking buck!
From: Jeff Holchin
13-Jan-21
When I lived in Ohio, I used to go to Columbus to the annual deer and turkey show in the spring and never got over the number and size of monster bucks killed or found dead in the Buckeye state every year; many never were entered in any record book. Sometimes, for good reasons.....when I would visit farmers and get invited inside their house, there would usually be a huge buck or two on the wall. Sometimes the stories of how those bucks were killed would make me cringe, such as “yeah, I shot that one from the combine with an old double barrel shotgun.....”, but the point is, the big bucks were there.
From: Zbone
14-Jan-21
WOW!!!

He might want to keep it on the down low though, although its a grey area, all wild bucks must be tagged in Ohio, meaning no pickups I think unless wildlife officers are called to find site, written permission from landowner, etc, etc... With a rack that size the DOW are notorious for confiscating big racks due to minor discrepancies...

From: Kevin Dill
14-Jan-21
I've found (and picked up) a number of nice skulls over the years, but of course nothing this big. In every case I snap some pics as it lays when found, and then after picking it up. I try to make it provable that it's just a found skull. I have never notified the ODNR, although it's probably wise to do so if you really care about keeping the skull. I will say that any skull which looks like a very recent death is probably worth a call to the local game warden...and DON'T assume you can just hacksaw it to keep. 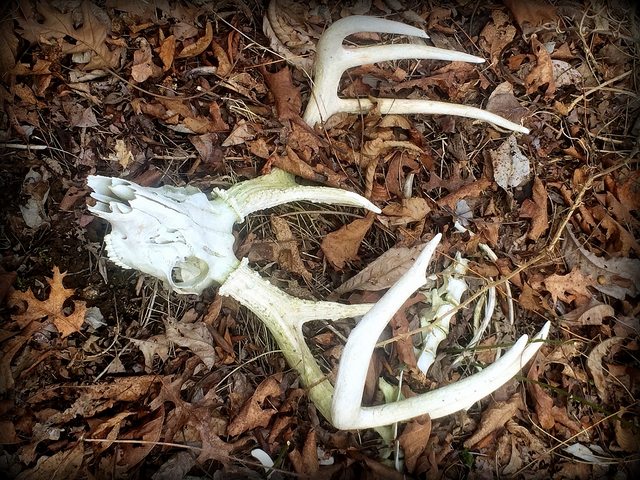 I once spotted a deer laying dead in a fallow field about 150 yards from the county road. I could see it had nice antlers and I walked out to inspect it. I went home and called the DNR to advise them of the deer, and to request the rack. I was surprised to get questioned hard on how I knew about the deer, and a few other details. It turned out the game cops were watching the carcass, as a suspected poach. They let the buck lay another 48 hours and then gave me a salvage permit.

From: Swampbuck
14-Jan-21
3 miles away? Even as the crow flies, good genetics moving around your area
From: Catscratch
14-Jan-21
I do the same Kevin Dill and call the GW before picking up any dead-heads. I first met our GW when he came out to tag a couple of locked bucks I founds (both dead). Since then I've had to contact him about poaching. It's good to have a working relationship with LEO.

The OP's buck is amazing! Would love to know about a buck like that in the area. 1 - the genetics are there. 2 - the nutrition is there. Very cool buck!

From: TrapperKayak
14-Jan-21
Thats a beauty Pat. When I first read your thread title I thought you were talking about the number of dead deer found from maybe EHD or bluetongue or something. Glad thats not the case.
From: LINK
14-Jan-21
“ I’m not an inches guy.”

From: Shuteye
14-Jan-21
Where I live you won't find antlers in the woods but for a short time. The field mice eat them pretty quickly.
From: orionsbrother
14-Jan-21
Wow! is right!

From: Habitat
14-Jan-21
Alot of big deadheads that are confiscated by W&P probably never make it to the office.Some states if they can't prove a law was possibly broken they are supposed to give salvage tag.But I have seen them argue about big deadheads that have been clearly hit by a vehicle but not pursue a case on a know poached 6 pt.Best advise is to know the law.Some western states you can't pick up one at all.
From: orionsbrother
14-Jan-21
Wow! is right!

From: wilbur
14-Jan-21
Amish coon hunters ran him off.
From: goyt
14-Jan-21
I was taking to an outfitter in our area that I met coming out of one of his sets. He said that they took a 220" buck just north of where we were talking this season and that he was not releasing any pictures yet. It is nice to see huge bucks like this in the general area. Thanks for sharing.
From: Boris
14-Jan-21
Here is something that is interesting. Take a look at the Sweety buck. I scored it, I scored it at 263 3/8 N.T. Official score is 263 4/8. It was found in south central Ashtabula county. Which is not that far from Pat's place. Plus if you look really hard at the two racks, they have similarities. Ohio wildlife biologist think the deer is 6 1/2-7 1/2 years old. Maybe older.
From: ohiohunter
14-Jan-21

Sweety
From: GF
14-Jan-21
Looks like that are exactly why I think the official scoring systems are just plain stupid.

I used to be kind of interested in understanding - just in real general terms - what 140 inch buck would look like, just so that I had a frame of reference when guys were talking about such things, but REALLY??

I would MUCH rather have a deer on my wall with some character then one that was all just Pretty and Perfect. And yes, that one would do very nicely!

From: Pat Lefemine
14-Jan-21
There’s two counties between us and Ashtabula county. Probably an hour away. It does have very similar characteristics.
From: clwg97
15-Jan-21
Should have let it walk for another year.
From: Zbone
15-Jan-21
ohiohunter - Thanks for sharing, I'd forgotten about that buck, but now do remember the news and crazy how these two have similar characteristics (and circumstances) but as Pat mentioned, there's a LOT of land in between, including the Hole in the Horn, and the baby Hole in the Horn (Osborne Buck) from Trumbull County killed in the 80's (I think, sorry am getting old and can't remember...8^))... I'd be almost willing to wager though, those two were genetically linked by location 40 plus years apart... Need DNA samples...8^)

Here we go again, how far do button bucks disperse and mature buck roam during rut spreading their genes… Am sure that NE Ohio subspecies and genetics did not come fro Montana...8^) From early 20th century whitetails were thought extinct in Ohio until around the 1920’s/30’s Actually, Ohio’s whitetails are kinda mongrels or sorta unique, migrating from PA in the east, Michigan/Indiana from the west/NW, and WV/KY from the south… Talked about it here before, I live near a major deer processing facility off I77 and back in the day the blaze orange army from the north would drop their deer off on the way home to have processed and would see dozens at a time laying on the floor to be skinned and cut up with different color shades and sizes from across the state… Was interesting...

Now thinking about it, I think the state record muzzleloader kill a few years ago had the same rack characteristic drop fronts...

From: altitude sick
15-Jan-21
Looking at the skull for scale shows the crazy mass of the bases and beams.
From: lewis
15-Jan-21
Crazy big set of horns good luck Lewis
From: Bowman
17-Jun-21
Wow, really, really big. Finding one in the forest would be a real find.
From: Snag
19-Jun-21
Pat, did you ever see this buck alive? 3 miles away that’s nothing for a deer to travel out west. Might be a lot different in the Midwest and East…?
From: Pat Lefemine
20-Jun-21
No, I just bought this property in March 2020. Never saw him.
From: RMhunter
21-Jun-21
Pat what part of Ohio are you in? I bought a place in Morgan county 5 year ago and I love the area
From: Norseman
21-Jun-21
So this thread is not about a new Neal Young song?
From: Pat Lefemine
22-Jun-21
RM,

I’m in Carroll County on the east central side. Not far from Tuscarawas county border.

From: Killbuck
22-Jun-21
I found a 183 deadhead on my property 3-4 years ago. Son worked for the DNR at the time. He ad the jaw aged by 3 wardens/biologists @ 3yo. Yah Ohio has potential.
From: RMhunter
23-Jun-21
Thanks for the response Pat. We had a very nice buck on the Ohio property last season that was very killable the last week of season but figured he made it that long so we decided to give him a pass. Hopefully he turns into something special this season, he had 15 scorable points last season
Register here to reply to this topic