Splitting my plot?
Whitetail Deer
Contributors to this thread:

From: wisconsinteacher
10-Feb-22
I'm planning on doing the no-till method this year by planting buckwheat and then killing/smashing it to plant my fall plants. My hope it to have brassica on one side and winter rye on the other. Knowing I need to plant the brassica in early Aug, and the winter rye in early Sept. can I successfully let the buckwheat grow an additional 3-4 weeks on the winter rye side or will it get too tall and cause issues? I also am wondering about spraying the buckwheat on the winter rye side. Will it kill the brassicas that are a month old with over spray if it happens? Or would I be better off not spraying and just crushing buckwheat?

From: Iowa_Archer
10-Feb-22
If I am understanding your intentions correctly, I don't think you will need to worry about killing your buckwheat in either manner(spraying or crushing). Buckwheat has a fairly short life and will pretty much die off and wither away after about 3 months??, double check me on the number of days. But part of the attraction of buckwheat is that it fades away fairly quickly...making it a super cover crop.

If you plant your brassicas in early Aug. I would just plant right on through whatever buckwheat is present. By the time you come back a month'ish later and plant your rye...the buckwheat is very likely to be all but gone...all on its' own. Or you could just sow your rye over whatever buckwheat is left and then mow it so as to create a mulch over your fresh rye seed. As long as your rye seed gets to the soil surface, you should be golden. I would not spray though...I don't think you will need to and I wouldn't want to risk any drift over to the nearby young brassicas.

Be aware that buckwheat is very vulnerable to a late frost, be sure to plant AFTER any threat of frost in the spring. Otherwise, I would select my planting date with the idea in mind that I want that buckwheat to fade out in about the mid-August timeframe.

From: wisconsinteacher
10-Feb-22
One thing to add it that I currntly have winter rye planted in the plot now. Last year it was 3" before the snow started to fly. The deer kept it mowed right down.
From: 35-Acre
10-Feb-22
Buckwheat is a very "fragile" plant. It will live longer in better climates but you can just drag it down with a harrow rake, chain link, run over it with the ATV, mow it or whatever. Once you knock it down, you should be in good shape.

The drawback of buckwheat is that it because it's so fragile and leafy, it doesn't leave as much organic matter on the top that you might hope for using a no-till/throw-and-mow(roll)/soil building strategy. I tried it for my first no-till (against advice), but it was on bare ground that had been recently bulldozed. It came up great - and the bees! I'll never forget the sound of the whole field buzzing with so many getting after the flowers! But once I planted into it and knocked it down, 2 weeks later there wasn't much protecting the seeds like you would get if it were wheat or rye. If you've ever seen a new lawn planted, where they cover the seed with hay and/or moss - that's sort of what you're trying to do with this type of no-till strategy. The overall goals to (1) always have something growing and (2) increase your organic matter by rolling/crimping/etc. that crop on top of the next. It basically turns the top of the ground into a compost of dead material that then bring in bugs and worms and creates a good bed for the next seed to grow in.

I'm no expert. I try like hell but I keep learning. This year I'm going into rye with clover and chicory just to have something that requires a little less time. The only reason it will be a success (finger crossed) is because I've done about 7-8 years of T&M. So I've now got some organic matter on top of the clay for things to grow in.

From: Bow Man
15-Feb-22
I would not spray buckwheat as it will die with frost. What will you crush the buckwheat with? What implements do you have?
From: Stressless
17-Feb-22

I tried the UNT and EZ Plot by Jeff last year. A few IF"S

IF the deer don't eat it too the dirt you Might be okay - they did in OH. I wrote up the results in an OH forum, this one is just hard to add content too so if you want to I documented my results, split between Brassics and Greens and went the hold 9 yards to try and make it happen. Just not enough Ag around me to release the browse pressure.

This post is where I started the capture of the buckwheat side. https://theohiooutdoors.com/threads/stressless-farm-blog-wildlife-habitat-improvements.26114/#post-825965

SO I'm moving the plots I tried that in back to mixed legumes and overseeding with rye. It's by far the best bang for the $/Buck

35acre is on the money with the mixed legumes and overseeding rye.

OBTW they ate my brasssicas side down to the dirt as well. Furry bastards! 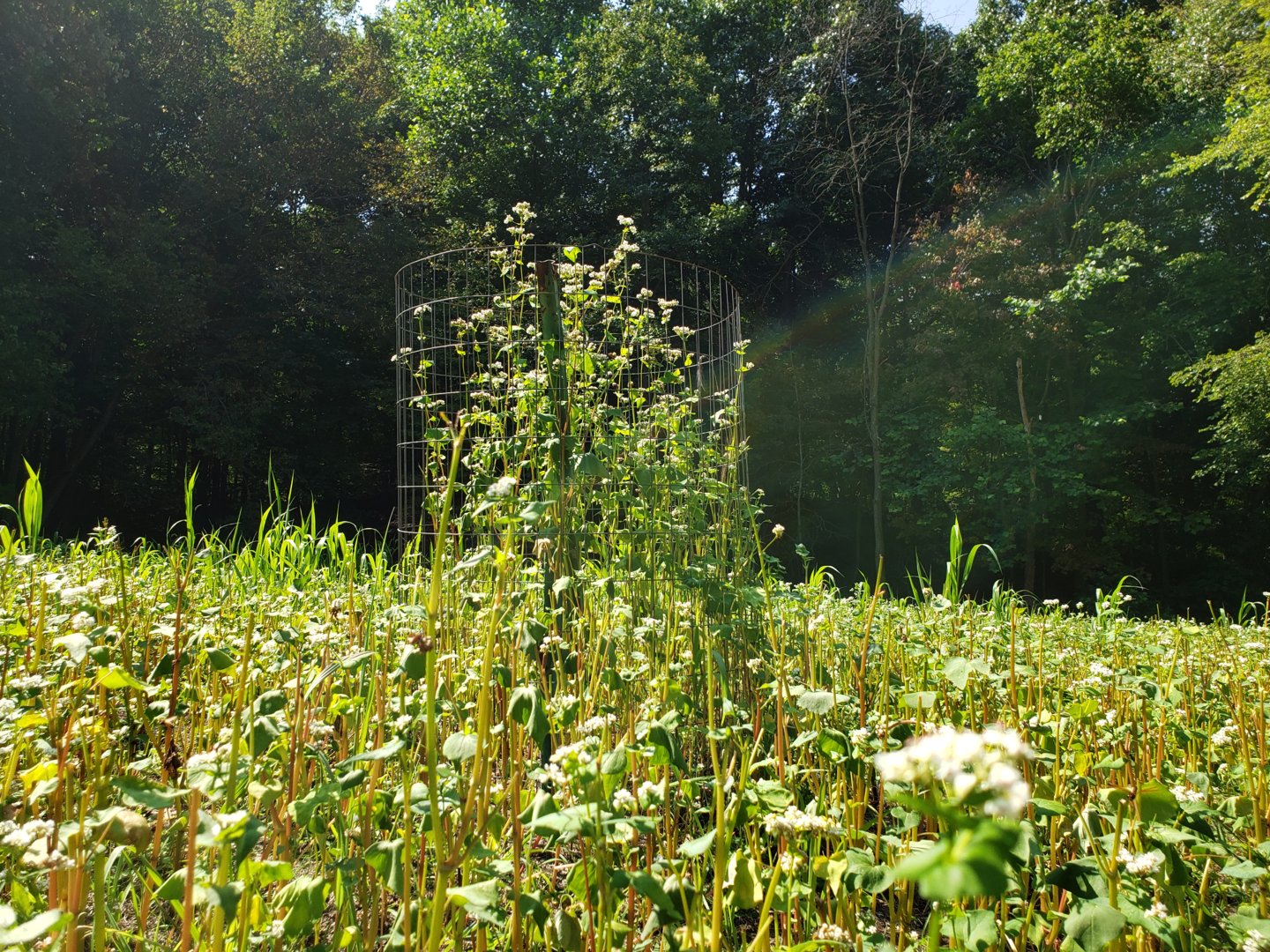 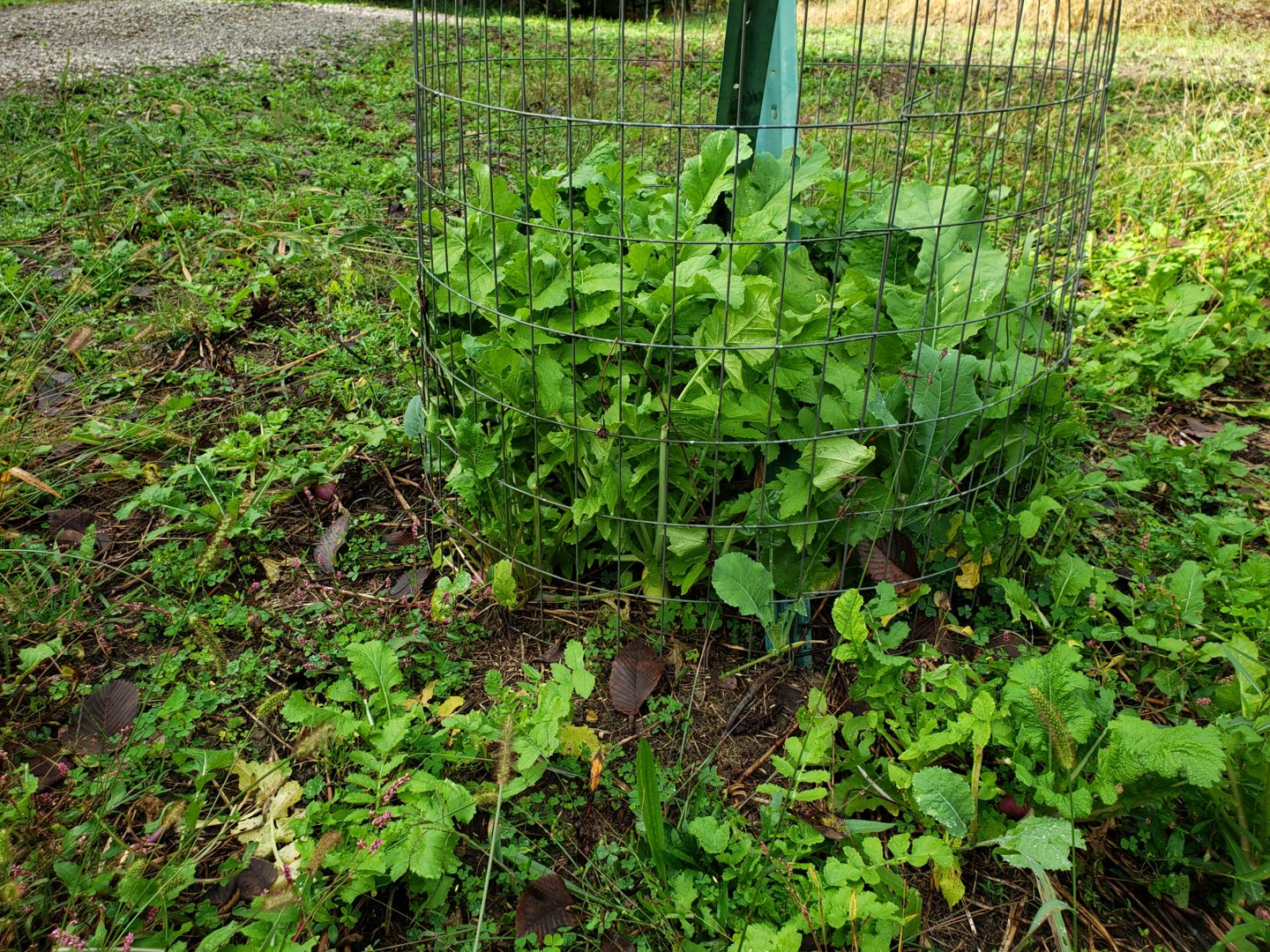 From: Stressless
17-Feb-22
On mixed Legumes with overseeded Rye...

This is the activity on one of my late winter plots, Legumes with overseeded rye. strong draw, they'll work to get that green. 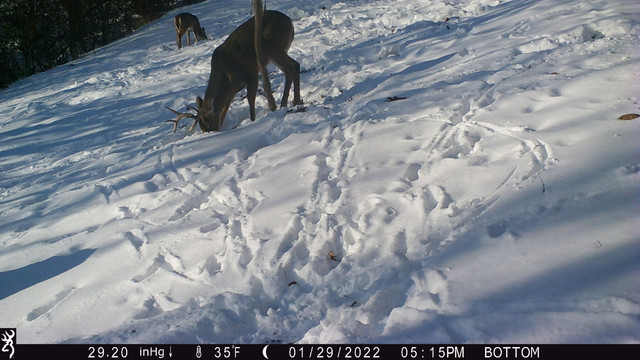 What's really great is that t here is food in the plots/ keeps some food for them until spring green up. you can see the 2" of rye that's been browsed chin high prior to the woods green-up. 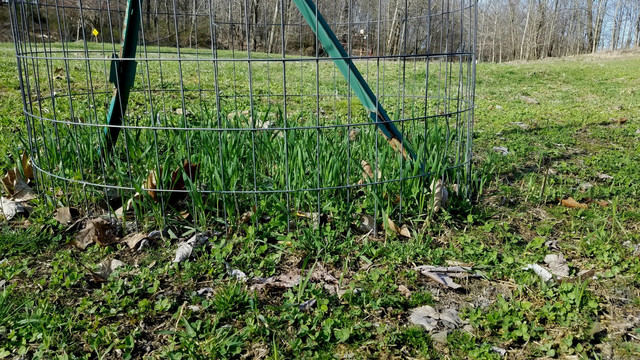 My #1 trick is to blow the leaves off ~ March and frost seed every other year or so. That gives the turkeys something to come into as well. 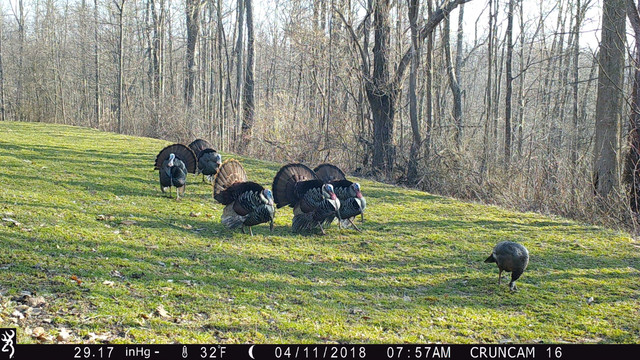 From: wisconsinteacher
17-Feb-22
Great info!!! I have an atv, sprayer, hand seeder and cultipacker to use on my plot. I believe that no matter what I plant, the deer are going to hammer it. My winter rye last year was kept down to 2-3" while my cage had 8-9" growth.
From: Arrownoob
17-Feb-22
Have you considered using the same amount of brassica over the whole plot and also spreading rye over the whole plot? Brassica does better spread out and this year I mixed rye and turnips and it was successful. I planted rye in two week intervals for 4 plantings.
Register here to reply to this topic